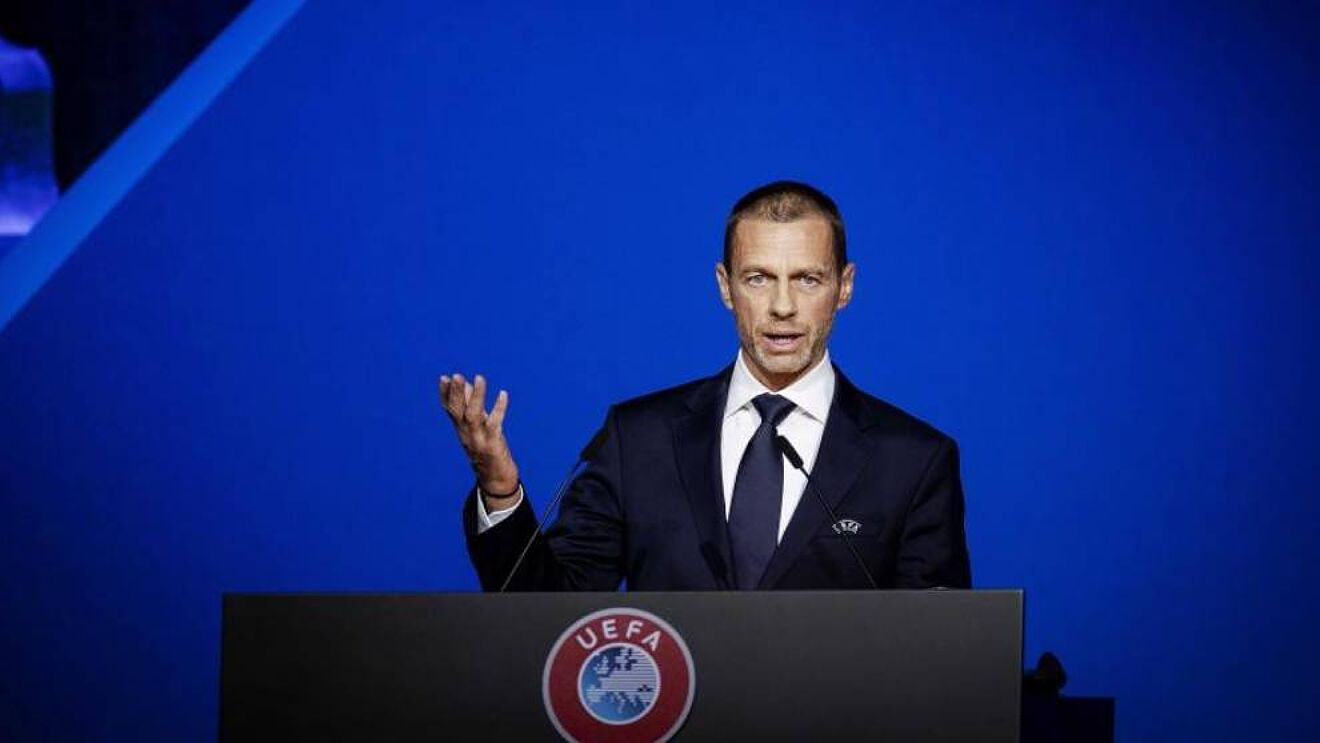 UEFA President, Aleksander Ceferin, has identified Real Madrid striker, Karim Benzema, as one of the “most under-rated players in history”.

Ceferin described Benzema, 34, as an incredible player who has always been in someone else’s shadow.

In an interview transcribed by RMC, Ceferin said, “For me, Benzema is one of the most underrated players in history.

“He’s an incredible player. Nowadays, he is more recognised, but he has always been in someone else’s shadow.

“It is incredible how he scores goals, by finding a way, even when it seems impossible.”

Benzema has been in brilliant form for Real Madrid so far this season.

The France international helped the Los Blancos to win the LaLiga title a few days ago.

The former Lyon star is currently the top goal scorer in the Champions League this season with 15 goals after sending Real Madrid to the final, where they will face Liverpool later this month.

Related Topics:Ceferin names most underrated player in historyUEFA President
Up Next

Prospective new Chelsea owner Todd Boehly and his consortium have reportedly made fresh contracts for Reece James and Mason Mount a priority.

The Blues have faced an uncertain few months following the sanctions on previous owner Roman Abramovich. The situation has affected every aspect of the club, from fans’ attendance to player retention.

Indeed, key centre-back Antonio Rudiger has decided to move on as a free agent to Real Madrid. He grew frustrated at waiting for Chelsea, who still cannot tie players to new deals.

However, there is light at the end of the tunnel for the Stamford Bridge club. LA Dodgers chief Boehly is leading a group who have agreed terms to take Chelsea over.

And according to the Daily Mail, player contracts will subsequently be high on the investment agenda.

The England internationals rose through Chelsea‘s academy and have become a vital part of Thomas Tuchel’s team.

And partly because of the connection with the academy, the Blues want the pair on bumper new deals.

Mount’s current deal runs out in the summer of 2024 after he last signed on the dotted line in July 2019. James, meanwhile, last penned a new deal in 2020. His terms therefore expire in 2025.

Right wing-back James has made himself a crucial part of manager Thomas Tuchel’s system. Attacking midfielder Mount has scored 12 goals and assisted 15 others in 50 appearances this season.

The Daily Mail adds that Boehly will pursue ‘A-list’ signings this summer.

At least one new centre-back is a key transfer mission, with Andreas Christensen leaving alongside Rudiger.

Boehly will in fact begin work on Chelsea’s summer spending this week. He will first look to meet with Tuchel to get the coach’s thoughts.

Blues need to get back on track

And they looked firm Premier League title challengers alongside Manchester City and Liverpool in the first few weeks of the season.

While the developments in Russia and Ukraine – and how they have affected Chelsea – could not have been predicted, the Blues need to refocus.

They can start by winning the FA Cup final next weekend, their second cup final clash of the campaign against Liverpool.

Indeed, Chelsea lost to the Reds on penalties in the Carabao Cup showpiece in February.

From there, Chelsea need a strong summer in the transfer market, addressing the issues at centre-back. Only then can they look towards putting up a proper fight for the Premier League title, which they have not won since 2017.

Tottenham Hotspur are set to win the race to sign out-of-contract West Brom goalkeeper Sam Johnstone this summer, according to a report.

The England international decided to run down his contract at the Hawthorns, making him available for free once the season has ended. A number of clubs were said to be interested, including Manchester United. However, it seems another top six club is now favourite to land the shot-stopper.

According to The Mirror, Spurs are set to sign Johnstone once his contract is finished.

The north London club are in need of some quality back-up for Hugo Lloris. Approaching 36 years of age, reinforcement is needed for someone who could take first-choice spot in the not-so-distant future.

Tottenham‘s current back-up is Pierluigi Gollini, who has been restricted to cup games this season. What’s more, he is only on loan from Atalanta and is unlikely to stay in London.

However, Spurs chairman Daniel Levy views Johnstone as someone with higher quality that can go head-to-head with Lloris for a spot in the team.

Johnstone has spent the last four years with West Brom and has been consistent between the sticks throughout.

However, he was left out the Baggies squad for the last five games of the season. Boss Steve Bruce decided to stand down the England keeper, accepting he would leave at the end of the season.

There had been rumours that Man Utd were keen on landing Johnstone for free.

The keeper was first-choice for United’s academy in 2011, however, failed to make a league appearance for the club.

After a number of loan spells, Johnstone finally secured a permanent move to West Brom in 2018.

But following news Johnstone would not be renewing his contract in West Midlands, Man Utd reportedly had Johnstone back on their radar.

Now, it is believed his former club have pulled out the race for his signature. The board at Man Utd are believed to be happy with David De Gea and Dean Henderson already on their books.

The club believe that recruiting in other positions during the summer should be seen as more of a priority.

Indeed, incoming new manager Erik ten Hag faces a massive rebuilding job. Saturday’s 4-0 defeat to Brighton made that even more crystal clear and the new boss is eyeing up a new centre-back, midfielder and striker.

Marcos Alonso has reportedly decided to leave Chelsea for Barcelona to follow in his father’s footsteps.

The Blues left-back initially developed in Real Madrid’s academy and moved to Stamford Bridge from Fiorentina in 2016.

But after six years in London, his future is unclear. He is also preparing to enter the final year of his Chelsea contract.

Reports in the past few weeks have claimed that Alonso has his heart set on moving back to Spain.

Furthermore, a move to Barcelona is his priority and negotiations are ongoing. According to The Mirror, Alonso’s big reason for wanting to move to Barca is to try to emulate his father.

Marcos Alonso Pena played for the Camp Nou club between 1982 and 1987 as an attacking midfielder and made 161 appearances for the club.

What’s more, he picked up 22 Spain caps in his career and so wants to take on the inspiration he has gained from his father.